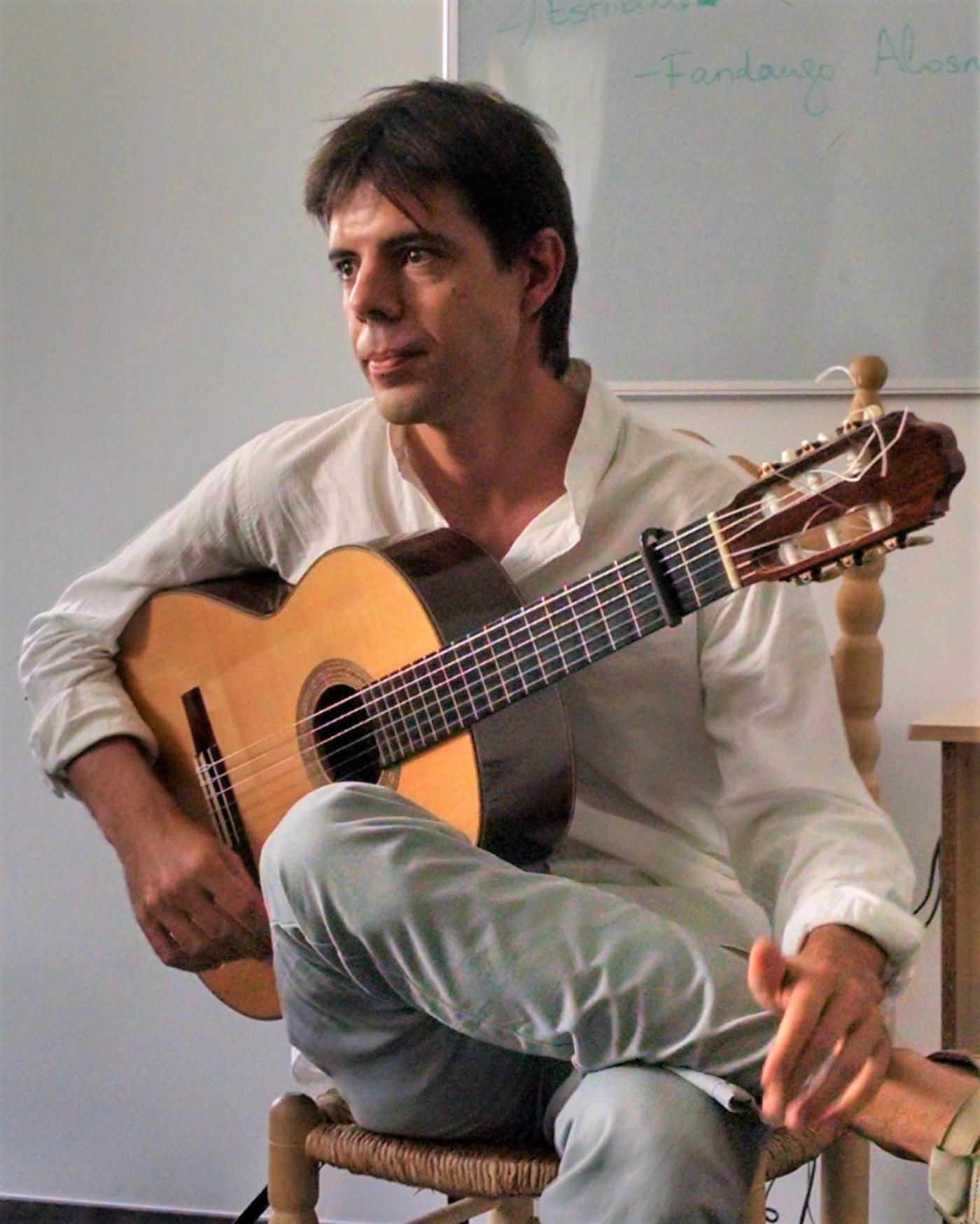 Pedro Barragán is a guitarist and professor at the Fundación Cristina Heeren in Sevilla. His performance resumé is extensive and he was the habitual guitarist of singing great Carmen Linares for many years, with whom he toured regularly while performing in many of the world’s greatest halls.

The interview was conducted on February 07, 2018, in the Triana neighborhood of Sevilla, Spain. It will be presented over the course of several posts.

To read Part 2 of this interview, please click here.

I am Pedro Barragán. I am a guitarist from Barcelona. I studied at the conservatory in Barcelona with Manuel Granados and came to Sevilla in 2002 to study and work and here I continue.

When you’re up on stage wanting to perform your best, do you play for yourself, your fellow musicians, the audience, or something different all together?

Oh yeah, that’s a really good question. I’d say to you that the most demanding audience is one’s own self. Which is to say that while you’re playing there’s a part of you that’s also listening to yourself and that part is more demanding than anyone out in the audience. Additionally, it’s also true that the guitar has a virtue that sometimes is problematic. You can be playing the guitar up there and at the same time be thinking of something else. That is something that doesn’t occur with singing. It’s like talking, right? When you’re speaking you can only think about what you’re speaking about. But with the guitar things can get automatic like they can when driving a car. There’s a part of the brain that just takes charge and you can play and be thinking of something entirely different. And up on stage this can be a problem because you start thinking about things; the mind plays games with you. You start thinking about who’s out in the audience and if they’re liking the performance or not. You start thinking about why a certain person came or you know that someone out there is another flamenco artist because they’ve got the look and maybe they know what’s going on here! The most demanding person is oneself because inside there’s all that imagination and all the different personas. This is somewhat psychoanalytical, but yeah, in reality there’s a lot of psychology in all this, for sure.

Maybe the response to this question could change for an artist at different points in their career?

Yes, absolutely. Surely the response could be different. I would have given you a totally different response ten years ago and surely I’d give you a distinct answer ten years from now. But it’s true, the stage really is a powerful thing. You step up on stage for a certain number of people, it could be 50 or it could be 400, who are dedicating an hour of their own time to listen to you. This type of exercise is one of really putting yourself out there. It’s really powerful, right! And so what goes through your head in that moment? Well, an entire life can pass through your head. Clearly my ideal would be to think simply about the music. Which means to not think of me, me, me, and how they’re all valuing me and how I’m valuing myself. I’m playing music, which means I’m part of something beautiful and I get to participate in that just as the public does. For me, that would be the ideal but to get to that point, I don’t know, I’ve got a ways to go.

It’s easy to know that but something entirely different to really do it.

Obviously, today in world of flamenco guitar there’s an incredibly high level of technique. But the point of art, well at least from my point of view, is to have something to say and to communicate it. So can you talk to me a bit about the approach and the attitude you have with respect to your technique?

Oh yeah, that’s a big topic, for sure. That’s also a topic I’ve been thinking about a lot myself lately, especially in my compositions. My reflection is this: we’ll start with Paco De Lucía, but actually we could start from much earlier. [Since Paco,] the flamenco guitar has been an instrument almost exclusively for virtuosos, or perhaps even from Sabícas or Ramón Montoya, who were also virtuosos. In flamenco guitar, the concept of virtuosity really weighs you down. It often feels like if you’re not a virtuoso, you simply can’t dedicate yourself to this. If you don’t dedicate many, many hours to perfect your picado [technique] or your ability to do really difficult things on the guitar you’re not going to get work. That’s where the level is, it’s at the level of those great virtuosos. So when I reflect on this I say, “Is this really necessary?” What I mean is that it seems like we just value virtuosity, and if the guitarist lacks many others things it’s not a big deal. The problem with flamenco guitar, and the solo guitar above all, is that now it practically doesn’t have an audience because the audience is basically just guitarists. Almost no one understands the flamenco guitar aside from guitarists. Artists like Paco De Lucía, Vicente Amigo, and a few others are exceptions because they have made music for a wider audience. But within the flamenco guitar circuits, for example if you go to a Bienal and you go to a guitar concert, practically the whole audience is made up of guitarists. Is this really of value? Maybe we should look for or prioritize other things before technique and virtuosity. Perhaps we should at least allow someone who’s not a virtuoso to say something to us. Perhaps someone who hasn’t spent eight hours every day studying technique has been spending that time studying, I don’t know, how to find the full beauty of a chord, right? Maybe that would benefit us all. I’m not saying that the virtuosos should disappear. It’s something that makes flamenco guitar special and give it its status, but I think there could be some variety. We could have other types of musicians too. We could at least accept them because the problem is that we don’t accept them. I’m thinking about this topic now because in my compositions I’m trying to create passages where nothing is faster than an eighth note. It’s taking all the energy I have because I’m clashing with the language of flamenco and its style of expression. It’s turning out to be much more difficult than a fast scale and flamenco has none of this. There’s not a single moment where you just hear… dee…da… dee… da… dee… da and where it just keeps that speed. You won’t find it. If you want that you have to invent it and it’s really difficult work.

What do you think about the word flamenco? What does it mean to you and how has it been abused or misunderstood?

The word flamenco is disputed. It’s a word that’s continually disputed. Those of us who dedicate ourselves to this, we guitarists, singers, and dancers place a certain significance on the word and for others who aren’t aficionados it means something different. I demonstrate this in my classes at the institute when I ask who likes flamenco. The four students that raise their hands say they like El Barrio. They like musical offerings that professionals don’t consider to be flamenco. However, they are the majority. There are many more of them than us. When we hear something come on the radio and they say let’s listen to a little flamenco piece and out comes some Pop fusion the flamencos always protest and say it isn’t flamenco. Then the public says: well it’s well done and well sung. The flamenco says, that’s fine but just don’t call it flamenco. That fight is always there and I don’t think we should be having it. I think from here on the word should have multiple meanings. It can be both things, we can share the word flamenco. It’s not a big deal.

So why is this word disputed? It’s a matter of identities. It’s as if it belonged to a certain soccer team. It’s as if someone was saying, don’t touch this, this is mine and it’s sacred, it’s something I’ve fought for my entire life and it’s also a community to which I belong. If you’re not part of this community you don’t know how this goes so please respect us. So there you have a topic for some sort of social psychoanalysis or something [laughing]. Why is the word flamenco so important? I don’t think it is; I think we could be more generous with its use.

For additional excerpts of this interview and others, enter your email and click Follow at bottom left to receive email updates.

If you would like to support Palabras Flamencas, please click the Donate button below or click here to purchase the author’s album, Punto Lejano. Thank you.